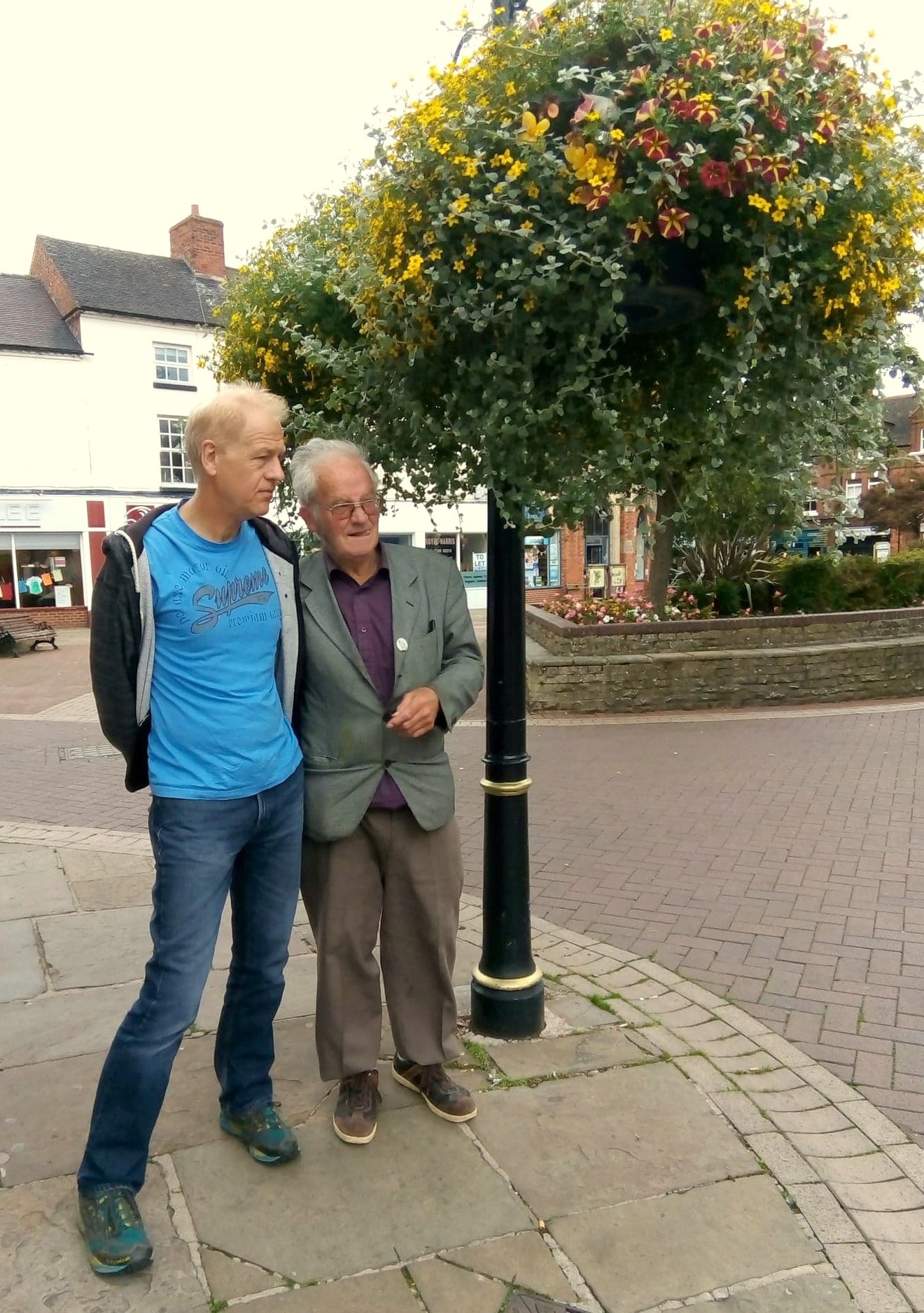 The object of this true story is to affirm that God walks with us in our trials but we may not always detect him because he appears in different guises.

Just over two years ago I was at a low point, perhaps the lowest I have ever been. My mother had recently died and my dad had a quadruple bypass plus I was going through serious relationship problems. Around that time I seemed to keep hearing the same story - two people walking along the road to Emmaus had someone walking along with them whom they failed to recognise, the unidentified person being the risen Christ. I heard this story so many times over a short period of time that I thought I ought to take note of it just in case I had the Lord walking along with me and I too failed to identify him.

This is where Ivan comes into the story. Ivan has a snorting problem. Several establishments have banned him from entering their premises, including two betting shops, the local library and a sports club. 18 months ago Ivan got scolded by a bus driver and was close to being ejected from the bus.

Now when I say that Ivan snorts I'm not talking about cocaine, no, I'm referring to snorting like a horse might snort. The sound is loud, uncomfortable and awkward for those in earshot. He has explained to me that he has an acid reflux medical condition and can't help making the sound. The consequence of his "medical condition," coupled with the fact that he would never win the 2018 Best Dressed Man award, (to put it politely), means he often finds himself alone.

There is one betting shop in town that still allows Ivan through its doors and, although I am not a betting man, I sometimes sit with him in the bookmaker's watching the horses on the TV monitors and talking about this and that. Ivan is not truly a betting man either but the bookie's in question give him a cup of tea and in return he has a small flutter on the gee gees. The companionship and cup of tea are the true reason that Ivan frequents their premises. I think he is lonely and needs a few friends. Ivan shared with me that he used to be married but that was a long time ago, his ex-wife has remarried and his only son never contacts him and has changed his birth name so Ivan doesn't even know what his son's name is or where he lives.

I first met Ivan when I was sitting in a local church. The services tend to be quiet affairs and because of the high water I was wading through I was a needing some peace, quiet and respite myself - I seemed to be assailed by stormy weather. I enjoyed sitting in a pew alone and contemplating any interesting points made during the service to see how they could help me with my current vexation. But that particular Sunday, just as the service was about to begin Ivan came and sat right next to me and immediately snorted, then got out a dirty looking handkerchief and, sort of, spit in it. I thought Why has he come and sat right next to me? Other people in the church began doing a shuffling half-turn while still in their seats, of the kind that people do who want to make a point that they are not happy with something but without them looking directly at the offending person. Then, during the prayer time, while we had our eyes closed, Ivan sneezed so loudly that everyone in the church jumped. Not only did he sneeze but his knees went up in the air and his feet hit the floor so hard at the exact same time of the sneeze that we thought we were being bombed. The minister did his best continue saying important stuff but it was all accompanied by the sound of loud snorting. I was glad when the service finished, I wanted to go home and have some supper but Ivan had put me off the idea of eating anything. So I went for a walk to try and regain some composure. I'd walked about a mile when I saw Ivan walking towards me. What! I thought, come on, give me a break. As our steps got closer to each other Ivan looked like he was going to walk straight past me, and I was about to let him too, without saying a word, when I suddenly remembered the two men walking on the road to Emmaus. So I stopped Ivan and said, "Hey, you sat next to me in church tonight." Ivan replied by saying "Did I?" "Yes you did." I replied, to which Ivan said, "Oh yeah I think I did. Okay, I'll see you next week then." "What's your name?" I asked as he walked on by, "Ivan" he replied.

I walked on thinking Oh no, this guy is going to be sitting by me every week now disturbing my peace. And he did. In fact we got to know each other fairly well and we met up at other times. We went to see a premier football match together, we would meet up in the town, Ivan came to see me sing at a local venue and I've visited him in his little flat. Ivan and I walked together. People from church would kindly offer to give Ivan a car ride home but Ivan would always reply, "No thanks I'm going to walk with Paul." Ivan's words were a great comfort to me. I felt as if Ivan was a proxy for Jesus, he walked with me. I shared about my problems with Ivan and he would help me see the lighter side of life.

Ivan told me he'd got a major birthday looming and he'd like to take a lady out for dinner to celebrate. "Which lady?" I asked, "Well, there's a widow at that church you go to who I'd like to ask out." So I informed Ivan of what I thought was the best way to go about such a proceeding, that basically meant wait until Elizabeth, (named changed) was on her own, pluck up your courage, and ask her out. "Okay" said the courageous man, "I will."

So the next few Sundays Ivan and I waited for the correct opportunity, but Elizabeth always seemed to be with someone. "Huh," mumbled Ivan, "she's always with someone." The birthday was almost upon him when suddenly, two Sundays before the big day, I spotted her alone at the end of the service. But Ivan was occupied talking to a man, "Ivan," I said with raised voice, "Elizabeth is free, quick, now's your chance." "Okay" he replied, but the man talking to Ivan seemed insistent on finishing his conversation. In the mean time Elizabeth was walking towards the back of the church. "Ivan, come on," "Yeah, I'm coming" he said. But by this time she was almost out of the door, so I ran after her and shouted "Elizabeth!" she turned and looked at me. I looked back to see where Ivan was and he was still collared by the man who didn't know the urgency of the situation. So I addressed her and said, "Ivan wanted to ask you something."

"He wanted to know if you would go to dinner with him to celebrate his birthday."

I felt like a school boy asking a female classmate "Hey Lizzie Ivan wants to know if you'll go out with him." Ivan eventually turned up and I broke the news to him that Elizabeth would be happy to go out with him to dinner. He smiled.

I understand that the dinner went well and Elizabeth bought Ivan a nice item of clothing as a birthday gift. As Ivan and I spent a little time together I would sometimes silently pray, "Lord, is there anything you can do about Ivan's snorting problem?" And slowly, I've noticed, that over the last two years his acid reflux problem, or whatever it is, has receded quite remarkably; I don't seem to notice it at all these days.

I sometimes wonder how God would behave if he came to church and sat down next to us. Would he turn up dishevelled and sneeze and snort and sometimes talk a little too loud at various points in the service? I came to the conclusion that, yes, maybe that's exactly what he would do. Not because he is mischievous but because he simply wants to see how we react to him turning up in church that way.

Relief for a problem may come from an unexpected source. I was in need and an unlikely friend came my way. If I've been any help to Ivan, Ivan has been more help to me. There's a proverb that says "Those who refresh others will themselves be refreshed" (Prov 11:25). That's the way positive progress in the world seems to be made, there appears to be a reap what you sow mechanism at the heart of life. I suppose we all want our prayers to be listened to and perhaps if we listen to others God will listen to us.