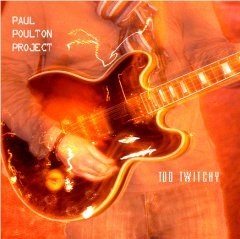 It's two years since Paul's last album, 'Looking For Someone to Blame', scored a creditable 8 out of 10 in these hallowed pages. Various tours later, he and the project are back with this new offering. The musical style still has blues influences, but has a very modern sound. The theme of 'Too Twitchy' is "relationships", and Paul works his lyrical magic into some very good songs.

He says; "The humour used in 'Coffee And Cake' is a warning firstly about addictions, which are stronger than we think. When life isn't going the way we want, comfort eating is a problem for some people. But of course there are far worse addictions, the addict in the song is a "substance user" and his addiction is spoiling his chances of getting the girl he wants." The band are very tight in their playing, and the opening 'Why' proves that from the very start. 'Lonely' looks at why so many people are lonely, when really, it's so easy get along.

Paul, himself, provides some excellent blues guitar on 'I Like You', and this song alone should gain him guaranteed airplay. 'Why Are People Like That?' is the title of a great foot tapper, and again shows Paul's keen observations on life. The Paul Poulton Project never fail to deliver, and this album is first class.